A presentation for the current climate and beyond …

Coming up – an event for the young and adventurous:

Are there quolls in the Strath Creek/Flowerdale area? If so, what do they look like, what are their habitat and food requirements, what is their life span and general behaviour and what threats do they face? All these questions and more will be answered at a talk about the Spotted-tailed Quoll at Kinglake West next Thursday evening. Full details are on the flyer below.

On Sunday 16th December 2018 the Upper Goulburn Landcare Network will be holding what will hopefully be the first of an annual event celebrating Landcare, community and family.

This event is for Landcare members and their extended families. Come along and enjoy a day of fun, food, family and festivities!

We look forward to seeing lots of you there.

For those with orchards…

It’s been and gone

Well the group’s AGM has been and gone. A great crowd turned out. Even some ex-Streakers (i.e. Strath Creekers) turned up. Sam Strong gave a great presentation on “How Myth and Language influence successful restoration and environmental management: Learning from two bushfires”, particularly pertinent to those in the room.

A new committee was elected and well, it looked very much like the old committee, just greyer, with a few position shuffles. John and Marilyn catered a fantastic lunch again and a good time was had by all.

Congratulations go to Susan King our new vice-president and winner of this year’s Em Tehan Cup for outstanding service to Strath Creek Landcare.

The Queens are coming!

You would have to have been living under a rock not to have seen the impact of European Wasps on businesses, lifestyles and the environment in our valley over the last few years. First seen in Victoria in the 1970’s this import, native to Europe, Asia and North Africa, is unfortunately  here to stay. They form large nests which at the end of the season could number as many as 20,000 individuals.

European Wasps are very effective predators and scavengers and in their ever widening search for food kill or drive off many of the native invertebrates. They also eat fruit, garbage, human food and carrion.

The photo above shows the typical life-cycle of the European Wasp. There are several key times when trapping can have beneficial effects in control the populations. One of those is now. As the weather warms up the queens come out of hibernation and take flight to build new nests. As one queen can produce thousands of workers, trapping the queen wasps at this stage (when there don’t appear to be many wasps around!) can have a huge payback.

At this stage of the lifecycle the unfertilised queens are looking for sugars to build fat over summer. Fruit is particular attractive. Simple traps can be built to catch them. The Murrindindi Shire Council has recommended (  http://bit.ly/2v0IwMl  ) using a plastic milk container, a piece of apple as the bait a mixture of honey, jam and vanilla essence to attract the wasps. The trick is not to trap the native wasps, flies and bees which are often beneficial pollinators and the honey bees. The vanilla deters the bees from the trap.

Give it a try. You have nothing to lose and a lot to gain.

Despite the inclement weather, and looking more like a stock-riders convention than a bird watching party, more than a dozen people from the SCLG and the Murrindindi Birdwatchers gathered at Coonans Reserve in Flowerdale to do a (wet) dry-run of the Aussie Backyard Bird Count to be held later in the month.

After years of work by the Landcare group,

Coonans Reserve (on the corner of the Upper King Parrot Creek Road and the Broadford-Flowerdale Road, for anyone who is interested) is now a haven for birds. The recent track extensions and removal of blackberry from the creek-side (primarily by Don and Dave) has made even more parts of this small but stunning reserve accessible. On Saturday morning during an hour long ramble over 30 species of bird were identified (see list below). 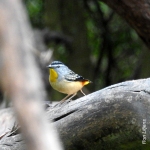 The highlight again this year was the sighting of our iconic species, the Crested Shrike-Tit. The award for sheer entertainment went to the flock of White-naped Honeyeaters (above right) feeding in the Pussy Willow (sorry birds, those trees won’t be there next year!). And the most elusive bird prize went to the Eastern Whipbird – clearly heard but only occasionally glimpsed in the dense thickets of Tree Violets. 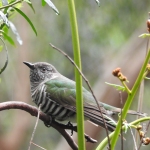 Many thanks to Dave and Laurie for organising the event and for providing the warming coffee and cake on such a wet day. We must be cuckoo (Shining Bronze, of course, pictured right).