The Queens are coming! 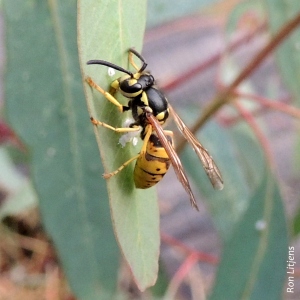 You would have to have been living under a rock not to have seen the impact of European Wasps on businesses, lifestyles and the environment in our valley over the last few years. First seen in Victoria in the 1970’s this import, native to Europe, Asia and North Africa, is unfortunately  here to stay. They form large nests which at the end of the season could number as many as 20,000 individuals.

European Wasps are very effective predators and scavengers and in their ever widening search for food kill or drive off many of the native invertebrates. They also eat fruit, garbage, human food and carrion.

The photo above shows the typical life-cycle of the European Wasp. There are several key times when trapping can have beneficial effects in control the populations. One of those is now. As the weather warms up the queens come out of hibernation and take flight to build new nests. As one queen can produce thousands of workers, trapping the queen wasps at this stage (when there don’t appear to be many wasps around!) can have a huge payback.

At this stage of the lifecycle the unfertilised queens are looking for sugars to build fat over summer. Fruit is particular attractive. Simple traps can be built to catch them. The Murrindindi Shire Council has recommended (  http://bit.ly/2v0IwMl  ) using a plastic milk container, a piece of apple as the bait a mixture of honey, jam and vanilla essence to attract the wasps. The trick is not to trap the native wasps, flies and bees which are often beneficial pollinators and the honey bees. The vanilla deters the bees from the trap.

Give it a try. You have nothing to lose and a lot to gain.

This entry was posted in Uncategorized. Bookmark the permalink.